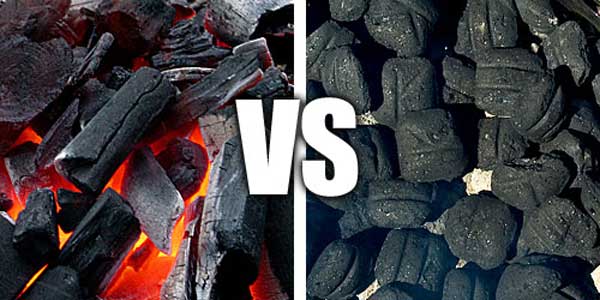 ​Imagine a holiday with your family after a long time, away from the busy city life in the beach or in a green yard.

The icing over the cake will be some yummy magical aroma of some barbequed meat.

Making them is easy and quick. But you will need some coals. Though the difficulty is to choose between lump charcoal and briquette.

After these many years since the inception of cooking, it is still undecided which is better. Both of them may serve the same purpose, but they are quite different from each other.

But you don’t have to worry as we got your back. We have done the research for you which will help you to decide between them. Here are some information about both of them.

This is natural and a very organic way of cooking. You may ask why go through this where you can use gas or other ways of cooking.

That’s because the main attraction of using this method is the aroma and smoky flavor which makes food lovers all around the world go crazy over it.

Hence, these features make lamp charcoal very popular and a fashionable way of cooking around the globe.

The aroma and flavor vary on the type of charcoal you are using. There are different types of charcoal; some of them are cherry, mesquite, coconut shell, etc.

This coal is mainly produced from wood scraps like branches, twigs, blocks, trim and other such scraps collected from saw mills or furniture, floor building materials.

These scraps then are burnt in the lack of oxygen which removes the moisture and the sap from them and makes them carbonized. Some dishonest manufacturers may add some harmful materials in it to bring down the cost.

The coals are then sealed in bags and sent for selling. As they are made organically, the final products have very irregular shapes and sizes. Also, the bag which you will buy from the store may contain dust along with the lump.

Lump Charcoal has many benefits and perks of its own. Below, we will talk about just the most common ones that matter.

Charcoal Standouts From Others And It Is Healthy

There are many plus sides of cooking with lump charcoal. One of the significant advantages is it’s fully natural and organic as no additives are added in it which makes it healthy.

The coal is very easy to ignite; you don’t have to do much hard work to light the coal up. It also produces intense flames and makes the grill really hot.

As a result, you get a perfect sear and burn marks on your steak and veggies. Also, the cooking process gets a bit quicker.

You can easily control the temperature by varying the amount of coal. Keep in mind that the process responds very quickly to air flow. And that’s a good thing as it gives you better control over the temperature.

Effect It Has On The Cooked Food

It produces more smoke which makes the food tender and gives a smoky flavor as well. And most people say lump adds more flavor to the food.

It produces a small amount of ashes as it has no binders.

Consequently, the ashes won’t block the chimney of the grill. That means you can cook a long period of cooking without blocking the airflow. The ashes can be collected and cleansed easily afterward.

As they are light in weight, you can easily move them while working in a grill or a smoker.

It’s not like they only have their benefits. In fact, everything has some downsides, no matter how top notch or expensive it can be. With Lump Charcoal, this is nothing different.

Nothing is perfect in this world, and the lump coal isn’t either. It has few negative sides along all its goods. The bag may contain waste carbon dust due to mishandling of the bags and bad filtering of the product from the producer.

As it is irregular in shape, it doesn’t entirely fill up the bag thus making it lightweight since the bag is mostly filled with air.

The Common Problems You May Face

Sometimes the lumps may be too big to fit in your chimney properly. As a result, you may lack the knowledge of how much fuel you have in the chimney. Since, lump contains dust, it may fill up the gaps and reduce airflow.

Considering that air is also a fuel to produce flame so there will be less flame. As a result, less heat is produced.

Sometimes, the lumps you buy may not be properly carbonized. If you use them, the flavors may get impacted negatively. Some pieces of coal might contain cellulose, lignin, and other wood components.

Usually, lumps are quite expensive and sometimes hard to locate. Besides, they run out very quickly, so you have to get a huge number of lumps before you start cooking.

These are like the cheap rip off of the coal talked about above. But they can still make the job done and has some bright sides as well.

Briquettes are manufactured from saw dust and pulverized left-over charcoals which are usually collected from mixed wood collected from timber fields.

These raw ingredients usually have the moisture of 50% which is reduced to 35% by drying it in a huge rotating barrel.

Then they go into special ovens called retorts where they are burned down to char in the presence of a little amount of oxygen. And the final product come out about 25% of the original weight that went in.

When the cooking of the char is done, it is crushed, and some additives such as cornstarch and other fillers are added to act as binders.

They enhance ignition, promote consistency, steady burning and make producing coal more efficient. The coals are often given a roundish shape which makes them easier to pile up and store.

Briquettes sometimes also contain other flavor enhancers and some bits of wood which probably been used during making them. One other thing that may be mixed is lighter fluid and other chemicals which help it to light up easily and burn longer consistently.

But most users complain that it ruins the taste of the food. As these additives give out a chemical smell to the food, the briquettes are usually covered with white ashes before lighting them up to prevent the chemical smell from entering the food.

Now, let’s get some idea on how Briquettes can benefit your cooking. This will help you make a well-informed decision.

Makes Working With It Easy For Users

As they are consistent, the amount is the same in all bags. Preparation time to make them light up is less, and it is also easy to light them up. This makes the work easy and less time-consuming.

They are relatively cheaper, and you can easily buy it from any store. This made it popular and accessible for everyone. People can do barbeque or grill without spending a lot of money in coal.

Soon as you are done with the benefits, what more you need to know are the odds you can face with Briquettes.

Difficult To Clean After Use

Briquettes produce more ashes as it contains a binder which is a noncombustible material that requires a lot of time and energy to clean up the ashes. And the ashes can damage your appliance if not cleaned properly.

Food Doesn’t Taste As Good As It Should Be

The chemicals present in briquettes ruin the taste of the food. Also, these don’t give a smoky or a natural flavor to the food nor a good smell as less smoke is produced.

Technical Difficulties While Working With It

It is difficult to control the temperature with air flow. Sometimes, it may take a long time to light up and it isn’t organic. It also doesn’t reach a high temperature which makes it hard and long to cook or get a perfectly cooked meat.

Which One Is Better?

Both lump charcoal and briquettes have good sides and bad sides. Which to use depends on your preferences and your skill of cooking.

If you are a skilled cook and seek quality food without caring about the expense, then lump charcoal is ideal for you. But if you want to save money and want easy cooking, you should use briquettes.

Most professional cook prefer lump charcoal as it provides flavorful, perfect and probably the best tasting meat quickly which compliments their quality restaurants. But on the other hand, the home cooks usually prefer briquettes as it is cheap and more accessible.

Top 10 Chicken Farming Equipment That You Should Have