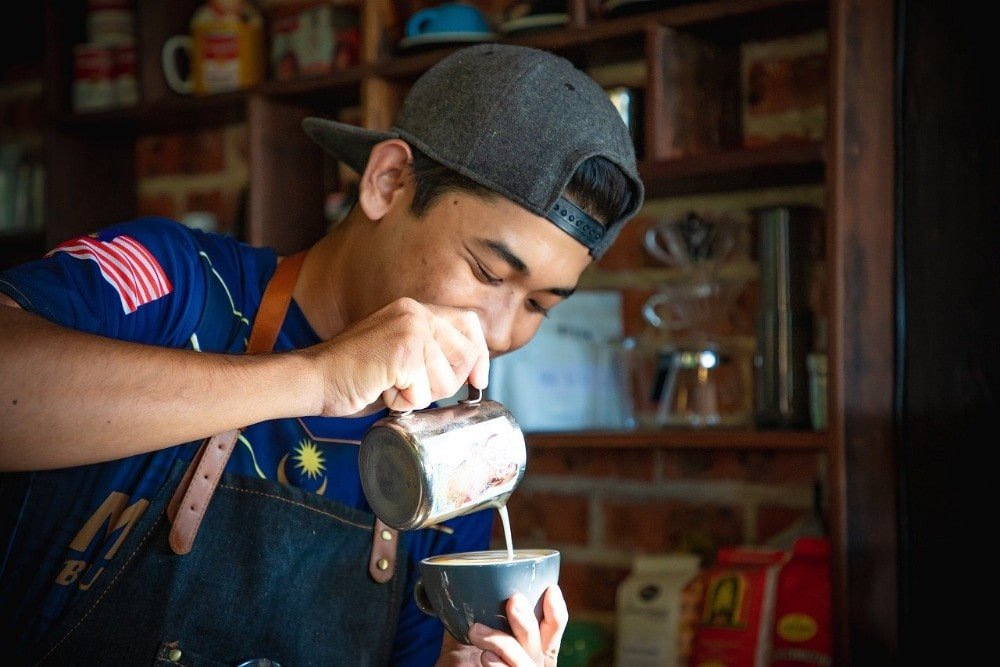 Milk Frother VS Steamer: What is the Difference?

If you are new to the world of coffee making, it is likely that you are unaware of the core differences between milk frothing and steaming. Some of you might even think that after all it is just milk, does it even make a difference how it is used in a cup of Joe?

The answer is yes, it does. The way you prepare your milk tells a lot about the flavor, aroma and texture of your coffee beverage. The core difference between milk frother and steamer is that a frother lets more air pass through to the milk, whereas a steamer heats the milk and gives it a thicker texture. Let us have a more detailed look at these two variations of milk preparation.

In a barista’s perspective, froth means to keep the milk more ‘dry’. This is achieved due to the foamy and lightweight element that is maintained during the process of frothing, using a milk frother or other similar devices.

Air bubbles are created during the aeration process, which eventually results in a nice, foamy layer that has an airy mouthfeel. If you have done it the right way, then your final coffee beverage should have a lot more density and fluffiness.

As far as espresso-based or milk-based drinks are concerned, creating a layer of foam is an essential part of the whole deal. Lattes or cappuccinos will not have their natural flavor if the final drink doesn’t have a frothy and foamy texture added to it. Usually, these sort of beverages have one-third foam in it.

Even cold coffee beverages such as iced cappuccinos can have a nice, thick layer of froth to add more texture to the drink. You can buy a milk frother or use a jar or a whisk to create the perfect milk froth to your coffee beverage at home.

If you know how to use a milk frother, then you can have your perfect milk-based coffee beverages without having to spend a lot of money on coffee shops. Since frothing doesn’t involve the heating process, you will have to pre-heat the milk separately, or you can get one of those modern-day electric milk frothers that come with both, the heating and the frothing system with various temperature settings as well like hot, warm or cold froth.

How to Prepare Frothed Milk

In order to create the perfect foamed milk manually, you need to follow these steps:

If you are using a steam wand or a milk frother, you need to ensure that the tip of the steam wand should be near the surface of the liquid.

This will help you to add more layer into the milk for a better texture. As soon as you see the level of the liquid rising, lower the jug or the utensil that you are using to froth your milk, so that the frother or steam wand’s end remains at the surface at all times.

Here are some important tips while frothing milk:

Steamed milk is usually created with the help of a steam wand that comes as a built-in accessory with an espresso maker. The mechanism of milk steaming is to pass steam at a very high pressure into a milk pitcher in order to heat it as well as create microfoam.

Microfoam, in the simplest of definitions, are the bubbles that are created during the steaming process. What really happens is that when pressurized steam is allowed to pass on to the milk pitcher, it texturizes the liquid and helps it to maintain consistency. During this process, the lactic sugar is heated and this in return, breaks down the fats – eventually creating uniformed bubbles called the microfoam.

In order to know that you have steamed your milk the right way, always look out for the velvety and silky effect that will have a reflective shine when poured into the cup.

One important aspect of milk steaming is that you need to use cold milk. This is because cold milk will give the steaming process more time for the aeration process and not let it boil too quickly while steaming.

Temperature plays a vital part during the steaming process. If you are not maintaining the ideal temperature, you won’t get the right strength or texture to your coffee beverage, let alone the latte art that you might be fond of. According to baristas and coffee aficionados, the ideal temperature for milk steaming is 140 F. Anything above that will make the milk less sweet and adversely affect the flavor of your beverage.

How to Prepare Steamed Milk

In order to create the right steamed milk, follow these simple steps:

For steamed milk, keep the following things in mind:

At the end of the day, it all depends on what type of coffee beverages you are looking to get and with what texture, mouthfeel, flavor and final taste. If you are looking for a proper microfoam added to your coffee drink, you should go for steamed milk.

However, if you are a fan of dense froth added to your hot or cold beverage, you should go with milk frothing.

In addition to this, the process for both may seem quite simple, but if you haven’t familiarized yourself with the technique, it can go wrong within seconds. We hope now you can do it on your own and enjoy your next coffee drink more than you enjoyed the last one! 🙂

What Type Of Ceiling Lights Should You Choose?

How To Remove Burn Stains From A Microwave

Quick Ways To Clean A Microwave